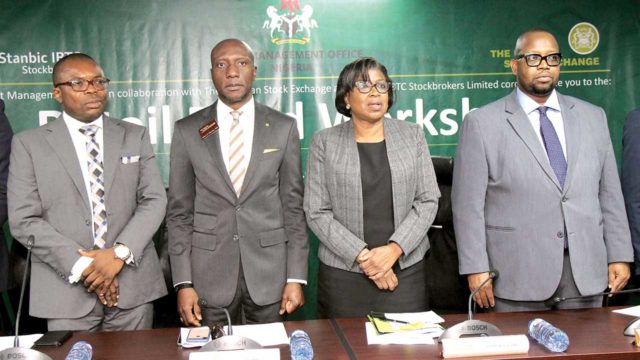 Further analysis showed that 431 corporates invested N1.75 billion while 15,822 individuals invested N11.75 billion, bringing the total amount to N13.5 billion.
The Head, Market Development, DMO, Monday Usiade, while addressing participants during the NSE, DMO, Stanbic IBTC Stockbrokers 2019 Retail Bond Workshop, in Lagos, on Tuesday, expressed dissatisfaction with individual investors’ patronage of the bond, saying a lot needed to be done to attract more investors into the net.
Usiade, who was represented by Ms. Bose Olafisoye, said 77 per cent of the investors were from the Southwest while eight per cent were from the Federal Capital Territory, and South-South, respectively.

Furthermore, he said four per cent came from the South-East and foreign investors, respectively, while the remaining three per cent were from North-East and North Central.
Usiade added that Jigawa and Yobe states recorded zero subscriptions, while Lagos, FCT, Oyo and Ogun contributed 75.54 per cent of the total investment.
This comes as the Nigerian Stock Exchange (NSE), also disclosed that only about three per cent of Nigerian adult population currently participates in the capital market.
According to the Exchange, this is an indication that there is a need for increased collaborative efforts in promoting higher levels of financial inclusion in Nigeria.

NSE’s Chief Executive Officer, Oscar Onyema, while addressing participants during the NSE, DMO, Stanbic IBTC Stockbrokers 2019 Retail Bond Workshop, in Lagos, yesterday, reiterated the Exchange’s commitment towards pursuing initiatives that will increase domestic participation in local bourse.
The Exchange said it intends to achieve greater inclusion through increased access to investment solutions, as well as support government to achieve inclusive growth and sustainable development.
Onyema noted that since the FGN Savings Bond (FGN bond) debut issuance of N2.067 billion, retail investors and Diaspora Nigerians have invested in the bond, with the DMO raising over ?13 billion from two-year and three-year bond maturities as at July 2019.

Our partnership with the DMO towards creating investment opportunities for retail investors in the Debt Market dates to the launch of the NSE Retail Bond Market in 2012; when the DMO appointed a government Stockbroker to provide liquidity in FGN bonds on our bourse.”
He said the Exchange has revolutionised into a multi-asset hub with a N12.47 trillion debt market providing investors access to a wide range of investment opportunities in the domestic and international capital market through the listing of sovereign, sub-national, corporate, and supranational debt issues.

The Turf War In Edo State

VAR to be used from Africa Cup of Nations quarter-finals

Remitly raises $220M to expand from money transfers to financial services, now at ~$1B valuation